As the Collections Manager of Works on Paper, one of my duties is to facilitate the movement of the prints, drawings and photography in the collection for exhibitions, rotations, loans and viewings for researchers in the Herzfeld Study Center.

Our works on paper storage vault is organized into logical, easy-to-use groupings by size, century, nationality and then by artist’s last name (OK; it’s highly organized).

While pulling a print to go on view in the galleries, I stumbled upon a print by Carl Andre from a portfolio that I have never worked with before.

You can see that particular print below.

Not knowing much about the portfolio I consulted our collection database where I found, in the object’s description field, more information both about the Andre print and the portfolio:

I continued to pull the remaining 12 prints of the portfolio and their object files. In the object files I found 8 1/2 in. squared envelopes like the one pictured below with the following information printed on the front of each: Title, Artist, Printers, Stamp, Edition, Paper, Date, Publisher and Distributor. 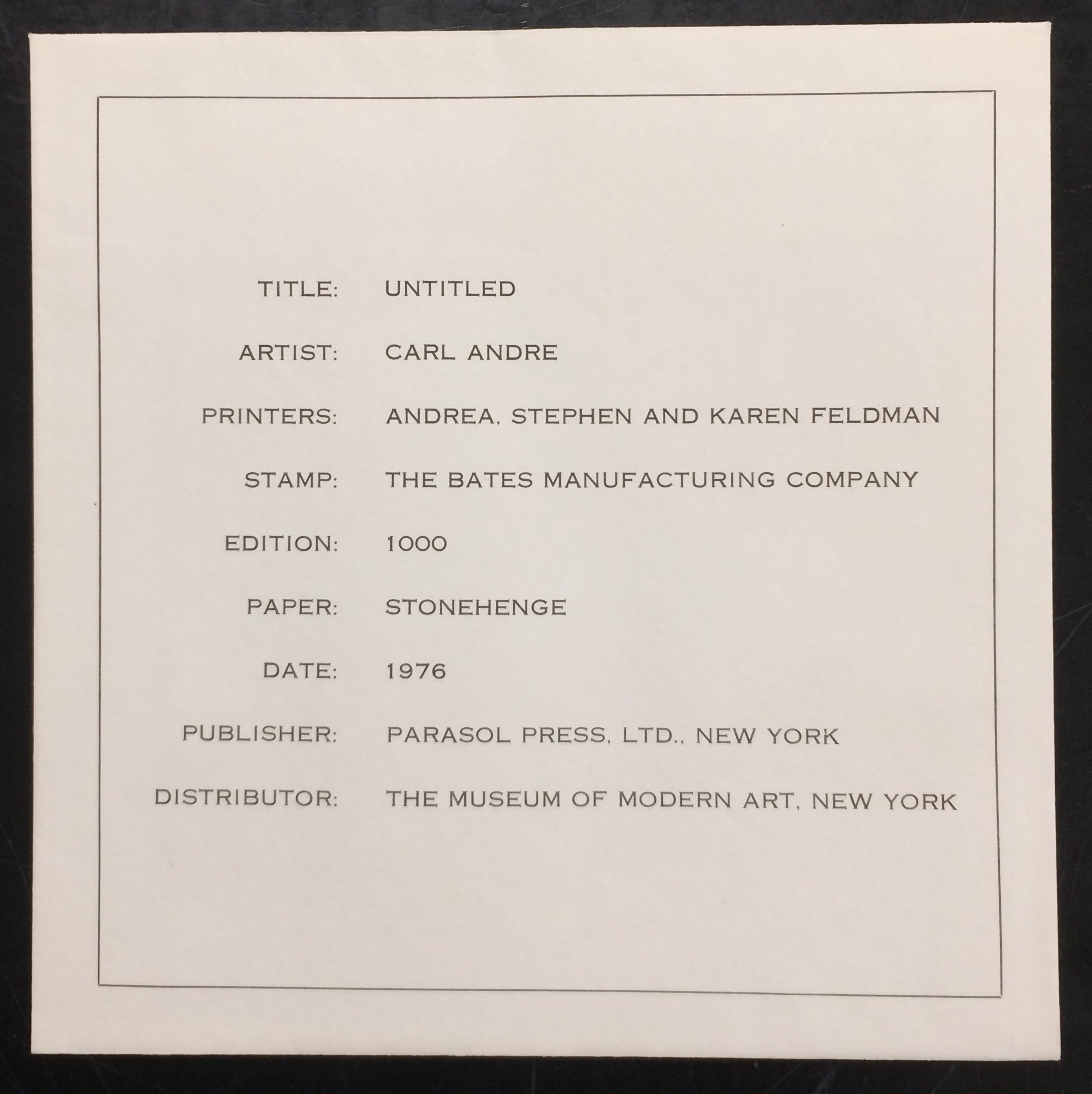 This was great information, but I still had several questions: First, how had this portfolio come to be? Second, what was The Museum of Modern Art’s role in the publication of this portfolio? And third… were these really created with rubber stamps?

I decided to go to the source and cold-called (well cold-emailed really) Parasol Press, LTD. In just over an hour’s time I had a delightfully witty and informative explanation from the mysterious “r.”.

At the time that the portfolio was published (late 1970’s New York), everything that Parasol Press was publishing was expensive. The idea of this project was to sell original prints at a fraction of the usual cost. It would be a portfolio of well-known or semi-well-known artists that would be intriguing to current collectors and new collectors alike.

The unorthodox publisher, dealer, and owner of Parasol Press, Robert Feldman (or “r.”), told me that the cheapest printing method that he could think of to use was a rubber stamp. With the printing method checked off the list, he moved on to deciding which artists to select and how to get them to sign on for a very small commission.

To sweeten the deal he asked art historian Riva Castleman, Curator and Prints and Illustrated Books Department Director at the Museum of Modern Art, if she would be interested in a print publication that would bring in money, but would only cost the Museum’s clout. Castleman allowed the press to use MoMA’s name and when artists learned that the print department of MoMA was backing the project, the deal was done.

Just who was Riva Castleman? She was an art historian and curator who built the Museum of Modern Art’s paramount collection of modern and contemporary prints. Castleman joined the department of prints and illustrated books in 1963 as a cataloger and spent more than three decades at MoMA serving as curator and department director until her retirement in 1995. In the decade prior to and during her tenure printmaking in America was undergoing a resurgence.

The print renaissance in America can be traced in part back to a British printmaker Stanley William Hayter, who arrived in New York from Paris in 1939 after fleeing France during World War II. Hayter opened an experimental print workshop named Atelier 17 at the New School for Social Research (re-creating his pioneer printmaking studio that he opened in 1927 located at 17, rue Campagne-Première in Paris). Hayter cultivated the idea of a communal workspace where emerging and established artists worked side by side.

Atelier 17 may have closed its doors in 1955, but the resurgence in printmaking continued throughout the postwar period with establishments such as the Tamarind Lithography Workshop, founded in Los Angeles in 1960 (now the Tamarind Institute a division of the College of Fine Arts at the University of New Mexico); Crown Point Press, which was created in 1962 in San Francisco; and Gemini G.E.L., started in 1966 in Los Angeles.

Perhaps the most notable print studio, though, was the Universal Limited Art Editions (ULAE), which was established in 1957 on Long Island by Tatyana Grosman.

The relationship between art publisher Grosman and curator Castleman helped to change how printmaking was viewed in the art world. Prints moved from a secondary art used in creating reproductions to an authentic medium used to create original works of art. Artists who explored this type of printmaking included Robert Rauschenberg (American, 1925–2008), Larry Rivers (American, 1923–2002), Jasper Johns (American, born 193), Helen Frankenthaler (American, 1928–2011) and, of course, those artists featured in the Rubber Stamp Portfolio. To read more on the story of Grosman and ULAE please click here.

Now back to those rubber stamps…

I have been told that the project was supervised at Parasol by Carol Androccio, who later married Sol LeWitt (one of the artists in the Rubber Stamp Portfolio).

The whole process of printing the portfolio of 13 different artists may not have always been smooth sailing, but in the end everything turned out great.

One thousand portfolios were printed and then sold at $100 each; today that would translate to about $500! Considering who the participating artists were, this would be a steal of epic proportions. Portfolios often include a case or box that houses all of the prints, but in this instance, there was no case, just a paper envelope for each print. Each envelope identifies the printer and the maker of the stamp used in the production of the print.

Collectively, the portfolio was in fact made with rubber stamps, but the execution varies from work to work. Some were printed by the artist’s hand (Artschwager). The rubber stamp blocks for the Wesselmann were printed on the letterpress machinery of A. Colish. And the print by Carl Andre was printed by the publisher’s three children Andrea, Stephen and Karen with a standard rubber stamp numbering device.

Some were naturally more complicated and conceptual than others. For instance, the print by Daniel Buren required separate printings. Like the other prints, the edition consists of 1000 pieces, but 250 each were printed in red, yellow, green, and blue; the piece in our collection is red #227. Conceptually the pieces exist as part of an installation consisting of all 1000 works from the final edition arranged on 4 walls per instructions from artist (printed on the back of the print).  The stamp was manufactured by Unity Engraving Company, Inc. and printed by Aaron Arnow.

This post has been illustrated with all of the artists represented in the portfolio. If you are interested in viewing the Rubber Stamp Portfolio or any other works on paper in our collection that are currently not on view you can make an appointment by visiting mam.org or emailing studycenter@mam.org.

One reply on “From the Vault: Rubber Stamp Portfolio, 1977”

Thank you for sharing this!