Images of women martyrs have always been popular in art. Their stories are ripe with dramatic moments that capture the imaginations of both artist and audience. The subject also offers examples of moral virtue. Images of martyrs could be used as teaching tools for women in the early modern era, visually showcasing the moral ideals that they should embody.

The subjects of today’s post, the Milwaukee Art Museum’s recent acquisition The Martyrdom of St. Justina of Padua, will let us look at this subject matter more closely.

Who is St. Justina of Padua? As an early Chrsitian matyr, there is some confusion related to her biography. She is most commonly identified as a member of the royal family in the city of Padua, a city in northern Italy. According to medieval treatises, she was considered a disciple of St. Peter the Apostle. In actuality, it would be impossible for St. Justina of Padua to be a disciple of St. Peter, as she was martyred in 303 AD and St. Peter lived during the 1st century AD. It is more important to realize that St. Justina and the first pope were connected by those living in early modern Padua.

St. Justina was martyred during the reign of the Roman emperor Maximan, or possibly Diocletian. According to her legend, because she refused to worship the god of war, Mars, she was stabbed through her bare chest. It is this scene of her martyrdom that is most often depicted in art. She is often shown crowned (because of her royal status), holding a palm, and maybe a book. It is also common for her to be depicted with a sword touching or piercing her chest.

The painting on display at the Milwaukee Art Museum, The Martyrdom of St. Justina of Padua, was painted in the mid-sixteenth century by Domenico Brusasorci (Italian, ca. 1516–1567). Brusasorci descended from a family of artists in Verona. His artistic training began in his father’s workshop, but it was completed under Giovanni Francesco Caroto (ca. 1480-1555).

Brusasorci worked in a wide range of media including frescoes, altarpieces, and cabinet paintings. He is most noted for the altarpiece of St. Margaret, located in the Cathedral of Mantua. Brusasorci’s style was deeply influenced by the Mannerist artists, and much of his work can still be found within the church for which they were originally painted. Because of this, the painting at the Milwaukee Art Museum is much rarer. Other images by Brusasorci can be seen in the collections of the Uffizi, the Prado, and the British Royal Collection.

The Martyrdom of St. Justina of Padua is an exquisite example of one his cabinet pictures. A cabinet picture is small in scale, but features full sized figures. The Martyrdom of St. Justina only measures 17 ½ x 14 in. The painting is done on slate, which is an unusual support. Yet, the stone allowed Brusasorci to create a work that is fluid and expressive. The end results in an image that has an almost jewel-like finish.

The physicality of the painting is important for us to dissect. The small size suggests that it was meant for an individual to own. Viewing such a petite painting is an intimate experience, and it becomes meditative action. The illustrious image, with its fine brushwork and gleaming finish, engages the audience’s interest with its pleasing aesthetics. This is in contrast to the graphic scene that Brusasorci depicts.

The images itself shows the saint as dramatically as possible–the moment before she is stabbed. A soldier brandishes a short sword and is roughly grabbing St. Justina. He is shown bent in the left hand of the image. His muscles are both tanned and taught, and he is shrouded in shadow. 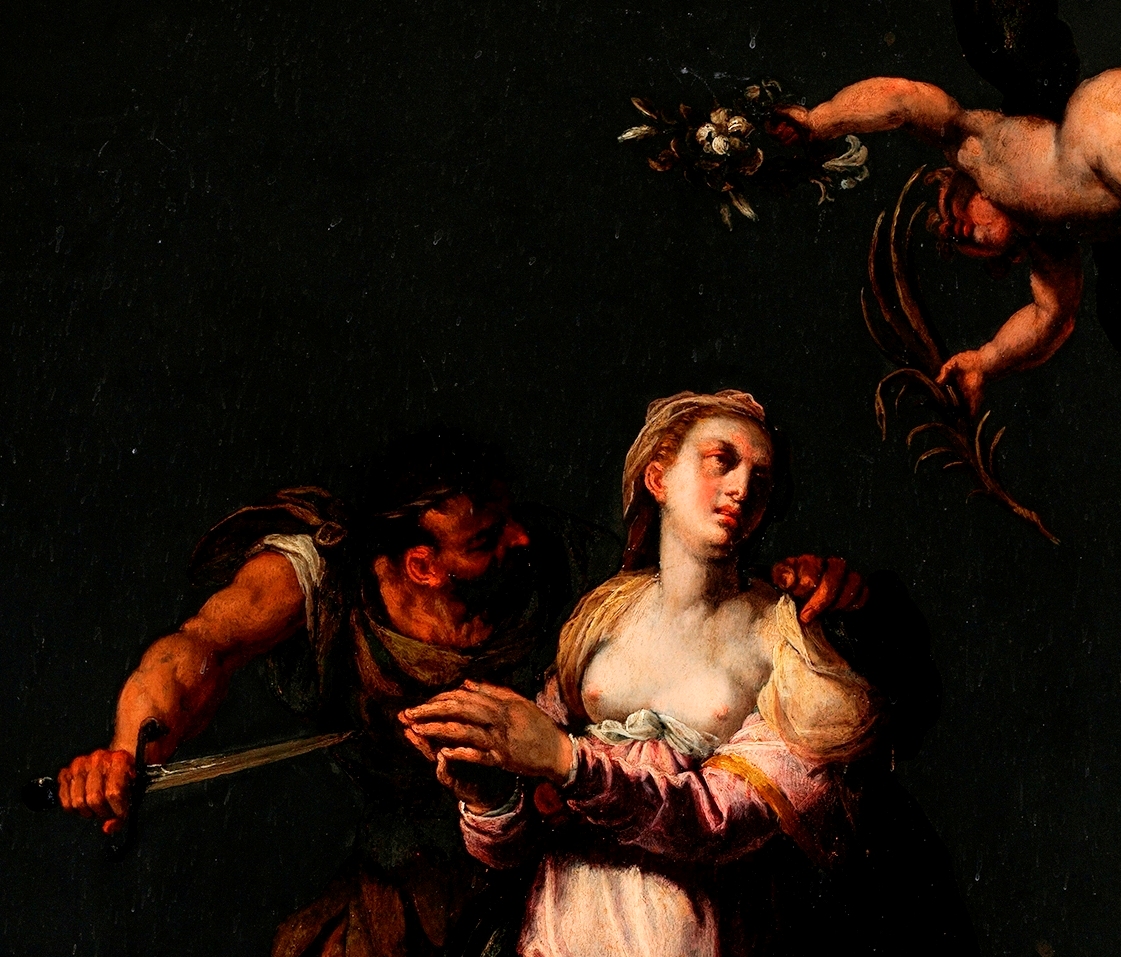 The soldier stands in direct contrast to the pious saint. St. Justina is depicted with ivory skin, with a softer body. Her breasts are bared, and instead of shrinking in fear or humiliation, Justina clasps her hands before her in prayer. Her head is turned to her left, gazing stoically to the heavens. From above a putto descends clutching a palm and a crown of lilies. On the ground before Justina lies a discarded crown.

There is a lot of symbolism to unpack in this dramatic image. Brusasorci casts St. Justina in soft glow, which illuminates her body and suggests the idea of the holy light of Christ. The soldier, in contrasts, is half in shadow. His face is obscured by darkness, symbolizing his immorality. The palm that the putto holds is known as a martyr’s palm; it a traditional symbol of those who have been martyred and signifies their unwavering faith in Christ. The lillies are symbols of purity and chastity in Christian art, and are a direct reference to Justina’s virginity. The crown at her feet is the reminder of her earthly status as royalty. It will shortly be replaced by a heavenly crown, denoting her as a saint.

Even though there is a large amount of symbolism in the image, it is the narrative of the martyrdom and the sacrifice she made for her faith that is the focus. Her bare chest is centered in the painting, and bathed in light. Both the sword and the putto are pointed towards Justina’s breast, drawing our gaze. We are shown the second before the saint’s death, suggesting a great act of violence is about to occur. This moment is wrought with tension.

To contrast the Milwaukee painting showing St. Justina’s martyrdom, let’s look at another that resembles a portrait: St. Justina of Padua by Bartolomeo Montagna at the Metropolitan Museum of Art.

Dating to 1490, it is of a similar size to The Martyrdom of St. Justina of Padua, and was likely originally one panel of an altarpiece. Unlike the image of St. Justina displayed at the Milwaukee Art Museum, this portrait is only bust length.

St. Justina is depicted in the costuming of a noble woman from the 1490s. The dress features lush green fabric with gold brocade at her bust. Expensive gems, such as pearls and emeralds, are sewn into the garment. Her long hair is also that is tied with jewels. St. Justina faces the left, in three quarter profile and gazes steadily at the viewer with half hooded eyes. In her right hand she holds and dark green palm, and a thin halo glows above the crown of her head.

There is one more symbol of her martyrdom: the handle of a knife can be seen sticking out of her chest in front of the shoulder nearest us. But, the weapon is not emphasized. In fact, at first glance it blends in with her elaborate dress so it is easy to miss. Montagna has used early modern portrait conventions to depict the saint. By using established traditions in portrait painting and contemporary dress, the early modern woman can to relate to the saint personally. Instead of meditating on her sacrifice, which is the objective of Brusasorci’s piece, the early modern viewer is able to see herself as St. Justina. The saint becomes a role model, a symbol of the ideal woman for the early modern viewer. Women of the fifteenth century could aspire to be her.

Is one type of painting better than the other? Is it more important to show a refined role model, and focus on the saint’s attributes, such as the portrait St. Justina of Padua? Or is a dramatic and memorable narrative that highlights a saint’s sacrifice the better didactic tool? Personally, I am drawn to the dramatic story as seen in The Martyrdom of St. Justina of Padua. I encourage you to visit the painting in person, at the Milwaukee Art Museum, and draw your own conclusions on which painting tradition is the most effective.