The current exhibition in the European works on paper rotation space (on view until July 30) is Alluring Artifice: Mannerism in the Sixteenth Century. The show features 30 prints that explore Mannerism, a movement that emerged in European art around 1510–20 and lasted until about 1600. Characterized by densely packed compositions and a focus on the human form, the style resulted in images that are deliberately challenging in both design and technique. One of the prints featured in the show is The Annunciation, an engraving by the Dutch master printmaker Hendrick Goltzius (1558–1617).

Over the years, people that I meet have asked me what I am working on, and I usually reply that I was reading a book on art history. At one point I said that to my mathematics teacher from high school. He turned his head quickly and said confidently, “Like about Da Vinci?”

“Do you know what drives me nuts about those guys?”

“No, what drives a math teacher nuts about the Renaissance?”

“Why would anyone attempt to make art after the Renaissance?”

What he meant, of course, was that the Renaissance solved many of the technical difficulties of capturing reality in art. The artistic drive to find ways to show human anatomy, depth of space, and emotional expression had resulted in masterful paintings and sculpture.

While this conversation seemed awkward and out of place, it prompts me to consider these questions. Where did art go after the Renaissance? How could artists continue to challenge themselves?

The answers are found in the complicated, and often confusing, style of Mannerism. To explore what I mean by this, today’s blog post will focus on the Mannerist artist Hendrick Goltzius and his engraving The Annunciation.

Hendrick Goltzius was a Dutch artist in the sixteenth century. He was well liked by the rich and powerful all over Europe, and included among his patrons the Holy Roman Emperor Rudolf II, who was a member of the closely knit, and art loving, Hapsburg Dynasty. With such patronage Goltzius was able to produce a vast oeuvre. He is best known for Mannerist style engravings produced in the late sixteenth century.

In general, historians use the death of Raphael in 1520 as a convenient ending point for the Renaissance. That is the thing with art historians: we know that there are problems with putting art into categories, but we still use them. These general facts help us to define our terms in a ‘big picture’ sort of way, a way that lets us differentiate between art movements.

With this in mind, we can situate Goltzius in the Mannerist period. Goltzius was living in a society where the influence of the Renaissance was still felt. In fact, sometimes Mannerist art is called “late Renaissance” art. Mannerist objects were created when High Renaissance artists, like Raphael (Italian, 1483–1520) and Michaelangelo (Italian, 1475–1564) were a living memory.

But at the same time, Mannerist artists, like Goltzius, were questioning the ideals of representation of the Renaissance. Now, this is not my attempt to situate Goltzius within a counterculture movement that was rebelling against the culture of the previous generation. We can easily dismiss this idea, when the traditional clientele of Goltzius is considered.

But, as I mentioned earlier, the Renaissance had solved many difficulties in the naturalistic representation of reality. So, what were artists supposed to do? Continue with this realism, over and over, into infinity? No, the ideal needed to be redefined. The ideal became elegant, refined, and artificial. The subject matter was less what was going on in the image and more the talent of the artist.

How can we identify a Mannerist artwork, then? Well, the Mannerist reinterpretation of idealism that is probably most noticeable is in the use of elongated curvature of the human body.

For an example, let’s look at Goltzius’s The Annunciation. The print shows the story in a traditional way. Mary is disturbed by the angel Gabriel, who was sent to tell her of her coming pregnancy with the son of God. Mary receives the news humbly, yet instead of turning her body toward the messenger of the Lord, she only turns her head to face him. Mary’s response is not fear or surprise but grace and humility. She gestures towards herself as if to question the angel, “do you have the right woman?”

We can see the Mannerist ideal of human elegance, which underscores Mary’s calm attitude, in her elongated turned neck. I always look at the artist’s depiction of the human neck if I am suspicious that an artwork may be Mannerist in style. In fact, one of the most iconic Mannerist artworks is Parmigianino’s Madonna of the Long Neck!

The Mannerist human body not only exaggerates the elegance of curves, it also delights in showing extreme musculature. In fact, sometimes it looks like the strong body is not just an ideal but a challenge taken on by the artist: how far can I go with this before it looks unrealistic?

Take, for instance, Gabriel’s arm. It certainly looks artificially bulked up, but not quite to the point of being ridiculous! Just enough to make you look in wonder and think, wow, that artist really understands anatomy.

The print to the right, which is also in the exhibition, is a great illustration of exaggerated musculature. This is Ugo da Carpi’s Diogenes, which is a print made after a design by the Mannerist master Parmigianino, who is mentioned above!

What other details in this print show us its Mannerist style? Mannerist artists used perspective to show space in their artwork just as Renaissance artists did. But in the Renaissance, the sense of depth is assisted by the inclusion of a landscape in the background or the use of one-point perspective, showing walls and titles disappearing in the distance through diagonals.

In The Annunciation, Goltzius does use one-point perspective in Mary’s kneeler, but, in general, he presents us with an event that has no detailed setting. Instead, he has created an elegant, balanced composition that is self-contained. It is the image itself that is the focus, not where it is occurring.

So how does a Mannerist artists show three-dimensions? I draw your attention to the top left and lower right corners of The Annunciation. There, in the foot of Gabriel

and the tipped body of the putto,

we can see Goltzius’s use of foreshortening. Foreshortening is a way to show depth by distorting an object so that it looks like as it is really perceived, not how it actually exists. Renaissance artists developed foreshortening (see The Lamentation over the Dead Christ by Andrea Mantegna (Italian, 1431–1506), but Goltzius effortlessly adds the foreshortened details like elegant flourishes. He used them to created depth in his image, but he is also showing off his skill as an artist.

There is one more way that Goltzius’s print is Mannerist. Just look at those strong lines coming from the dove that represents the Holy Spirit! It creates heightened emotion within the image. This dramatic use of light, and the shadows that it produces, functions as an announcement of a heavenly presence. 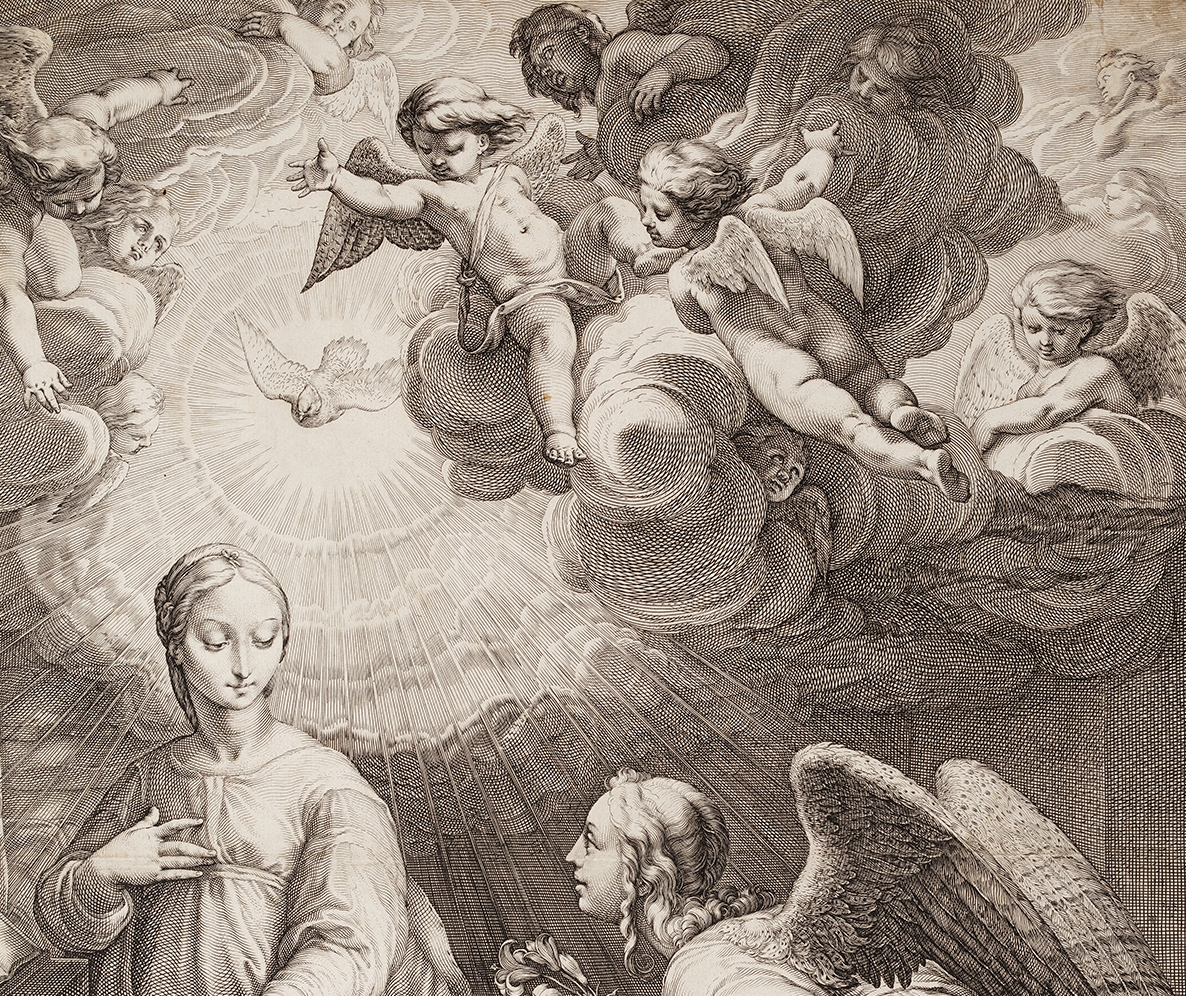 In the meantime, the drama occurring above Mary, with the putti packed in tightly, contrasts and therefore draws attention to the elegance in her reaction. This image is a true tour-de-force of composition and emotion that fits Goltzius squarely into the Mannerist artist’s interest in creating complicated, powerful images that illustrate his artistic skill.

Mannerist artworks can be intimidating, but hopefully after this post, you will find appreciation for them!

2 replies on “From the Collection: The Annuciation by Hendrick Goltzius”

[…] style and context of an artwork. They offer guidelines for further exploration. For example, in an earlier post, we learned about the style called Mannerism. Romanticism, like Mannerism, is more complicated than […]